Singing Praises for Biotechnology in the Classroom and Beyond 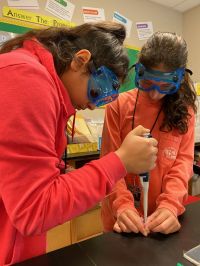 Earlier this month, I had the permission, oh what a privilege, to visit Victoria West High School, and biology teacher, Karew Schumaker, along with 24 students from her second period AP Biology class. That day marked the kick-off to her “Building Understanding Through Biotechnology” program, and I wanted to be there. In total, Schumaker received $2,499 to support the implementation of gel electrophoresis labs using Minione Systems technology made possible by a grant from the Education Foundation.

Observations are one of my favorite activities of my job as I get to look for the good in people and also in the educational environments that we financially support. It is also a fantastic way for me to feel a part of something so much bigger than the Foundation itself. In retrospect, and with a heavy heart, this site visit was something I took for granted then, not realizing that it may have been my last school visit for the remaining spring semester.

As I reflect, this time at Victoria West also holds particular significance to me, since my first job out of college, more than 20 years ago, was with a biotech company doing cell transformation and greenhouse research. I realize that the world of biotechnology is a highly contested one.

Still, biotechnology is at the root of finding the cure to COVID-19 as we enter Phase I trials with scientists from the National Institutes of Health and biotech firm, Moderna. Because of this, we should all sing biotechnologies praises in an on the rooftops, balconies, and stairs kind of way.

The kids in Mrs. Schumaker’s class were certainly singing its praises, not through words so much, but through harmonious actions of curiosity and reflection of the science kit before them. They seemed to enter a world, an exciting abstract world, of the unknown, yet in theory – one of answers. These teenagers were on a playground it would seem, equipped with twisting slides and ladders in a DNA double-helix structural masterpiece, and they weren’t about to come in from recess.

To help her students seamlessly enter this space of learning, Mrs. Schumaker had spent over two hours the previous weekend with her husband and the rest of her family to prepare and “build” this so-called “playground,” since it was the first time the students would complete it.

Before the students began the lab, they were instructed to head to the black science workbenches in groups of four to six. They quickly followed orders. I happened to be in a group with student Kanella Cohen, equipped with our transparent turquoise-blue plastic lab goggles. Miss Cohen proceeded to carefully extract 10 µL of DNA out of a one-inch tall centrifuge tube by pipette and injected slowly into the gel electrophoresis plate. One by one, students were allowed to load the dry wells, six in total.

At that point, 135 milliliters of buffer solution was added, and the lid was placed over the unit. Without being prompted, Kanella commented, “this is so exciting … I love this stuff.” Just after she said this, though, we were called outside for a fire drill of all things, but the kids were ready to go back to class to finish the lab. We did make it back in time to see a reasonably successful time-lapse photo of DNA separating through the gradient, with smaller genetic fragments traveling faster and farther than the larger ones.

In closing, Mrs. Schumaker went on to share that: “This lab also goes beyond just content; it involves learning to use micropipettes, following detailed laboratory procedures, as well as collecting, graphing, and extrapolating from data. It is helping develop their scientific skills and not just their knowledge of one type of biotechnology.” Wow. What a teacher.

So, thank you, Karew. You genuinely personify the word biotechnology as you help bring kids to life (translated bio in Greek) through technology. Now we can all sing to that.