Budding Thinkers in the Making 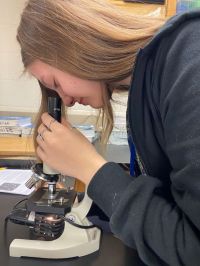 My 20/20 vision intently peered into a compound microscope and adjusted the knobs to bring forth the highest level of clarity, to observe yeast cells budding. These cells, to me, were not much different from teenage life. Budding beings, who shoot up in growth and, who some would say attitude, but I would say identity formation and exploration.

Such investigation was the result of my visit at Stroman Middle School to observe Elise Tate, Advanced Academics coordinator, and winner of our Grants for Great Ideas program back in August of 2019 with her project “Let Us Inquire” and $5,000 to implement an inquiry-based labs system from Kesler Science. The project began in September of 2019 and aims to benefit students at all five middle schools in VISD.

Upon arrival, almost a full 45 minutes before her class started to 7th-grade science teacher, Ms. Rhonda Sim’s classroom, I observed preparations required for the lab setup. As the students arrived, and Sims began instruction, Tate prepared the yeast solution, so it was ready for the students to observe under the microscope. As a scientist myself, being organized is key. Having a space ready for learning does not just happen, and as the French would say, mise en place or everything in its place is an excellent mantra for making the magic happen in a science lab.

Today the students would be studying genetics and specifically about the differences between asexual and sexual reproduction. The lesson featured Saccharomyces cerevisiae or baker’s yeast. The students explored how yeast reproduces primarily asexually through a process known as budding. Interestingly enough, and in contrast, yeast can also go through sexual reproduction, allowing it to be a unique model and standard in all types of cellular biology research.

Once the students read over the lesson’s background, they were instructed to begin the lab. Tate’s hope with the project is “to promote higher-level thinking.” Kesler Science’s inquiry-based learning has three levels of study to help do so: independent, dependent and modified. The independent level is suggested for advanced learners; the dependent is for on-level learners, and the modified is for learners needing a bit more instruction. The system promises that all students, regardless of ability or interest, will be challenged.

Tate did go on to say that many of the students, and at all levels, and all schools, were having a difficult time in transitioning to this new learning program, as much of science instruction previously practiced has been primarily teacher-led, which is typical in K-12 education. “This system has been harder for the kids than we thought.” In essence, students are accustomed to being told what to do, and now that they are asked to inquire more for themselves, it requires another level of responsibility.

Such transparency is key to putting a spotlight on growth, so thank you, Mrs. Tate, for your dedication to the system of learning. These lessons take time, and we appreciate your steadfast approach to creating a culture of inquiry and student-led investigation in VISD, fostering an environment where “inquiring minds want to know,” think and create a life for themselves as they learn to relate to information, to others, and to the world around them.