A Vehicle for Learning Real-World Lessons 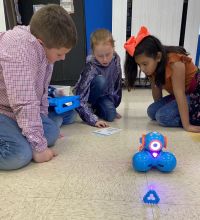 I dashed out my office door to go driving out in the country down Farm-to-Market Road 236 in my ordinary Volkswagen Jetta SportWagen. The “nerd-mobile” as my kids like to call it, for a visit to Mission Valley Elementary and fifth-grade teacher, Mrs. Joycelyn Drozd, and her “DASH to the Finish” project. This in-class robotics initiative made possible by the VISD Education Foundation and technology from Wonder Workshop began in January of this year as a result of her $1,895 grant award to benefit students in grades three through five.

As I walked into the cafeteria where the fifth-graders were separated in groups of two to three, I couldn’t help but notice how they were quiet, engaged and genuinely focused on learning. A teacher’s paradise. A cool, comfortable and open space with students who wanted to be there. It was the kind of place that made me want to putter around and stay for a while.

The view was like watching a flame at a campfire. I was mesmerized by the instructional beauty of the children taking literal control of their learning as they programmed DASH, the turquoise-blue and orange, squatty three-wheeled robot. Their glow of excitement inspired me and kept me in a trance.

These kids were more than flickers of light with glints of promise; they were burning bright, a constant source of educational energy.

And what’s more, all the kids, yes all, were into it. When asked what her favorite part of the project was, Drozd responded, “Seeing the kids’ excitement, engagement and watching them work so well together.” Third-grade teacher Mrs. Godby shared that she most appreciates how “the kids create new things while programming.”

A little while later, as the third-graders entered the room, they partnered up with the fifth-graders. “Show them how this works; let third grade take control,” announced Mrs. Drozd in her best, loud and proud teacher’s voice. The kids love the robots so much that “you have to ask them to share,” she whispered under her breath earlier in our conversation.

Trevor stated his favorite part is you “get to create something new,” while Hector loves the “obstacles and making the robots light up.”

Nicole added that “they are fun to program,” and Jessica uttered, “the sounds they make – that’s what I like best.” But my favorite response came from Jayci, who said she “loves this new experience because it is challenging and actually makes you think.”

So, what are these kids learning anyway? They are learning to work in a team, and how to read instructions and apply them a real-world need: programming. They are also developing their creativity as they craft the robot to do what they want it to do, and in doing, are getting positive reinforcement and developing confidence.

Before I left, I told both Mrs. Drozd and Mrs. Godby how proud we are of them. Their gaze, in return, almost had me in tears. We must all remember that technology is only as good as the teachers that stand behind it. These educators have shown how to set the stage for success by putting kids in small groups to work while giving them enough space to figure things out for themselves, with the opportunity to mentor (and teach) younger kids to be proficient in programming. What a delight.

So, thank you, ladies, for taking the initiative to apply to our Grants for Great Ideas Program! Your work in the classroom is a shining example of how teachers in VISD are helping to shape well-rounded children ready to be team-oriented workers programmed to meet the challenges of the 21st century.

As they say in Italian, these women are doing more than tirare la caretta: slogging through the dull and everyday chores (translated to pull the little cart). No siree. They are driving a Maserati of a movement on a back road in Mission Valley. Thank you for an exhilarating ride.